Nowadays, industrial routers are relatively unknown among ordinary users. These routers are often referred to as M2M routers. They are typically used to control data communications in industrial applications where they can be used, for example, for monitoring, remote configuration and diagnostics.

However, some devices deserve the attention of ordinary users, especially when the purchase price is in a range similar to that of home routers. The fact is that industrial routers are far superior to domestic routers. Let's briefly discuss these advantages.

For industrial use, cellular routers are very often used and allow a combination of both WAN and cellular WAN via 2G / 3G and LTE. This will allow you to connect via a mobile network even from locations where coverage is not yet available from your local Internet provider. It also uses a combined connection, where the mobile network serves as a backup, when the local provider fails, the Internet does not shut down completely, but the router connects to the mobile operator's data network.

An example of the aforementioned industrial router is the RUT950 model from Teltonika, a Lithuanian company that primarily focuses on the design of M2M industrial routers. Their products are distributed worldwide and can be found in a wide variety of solutions. 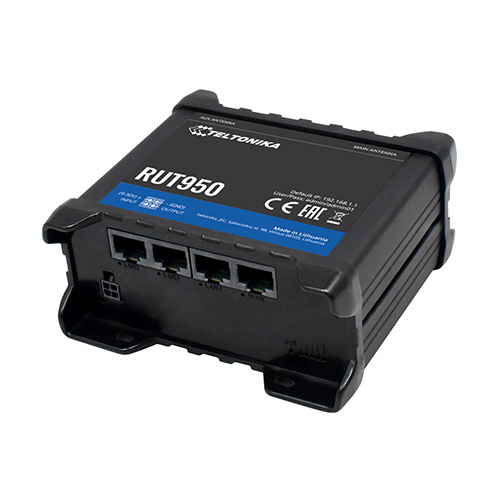 A closer  introduction of the Teltonika RUT950 router is presented in our review.

Teltonika RUT950 is a category 4 LTE router, which means that it offers download speeds of up to 150 MB/s. The router is designed to use two SIM cards, where one can serve as a backup in case of failure of one of the operators. The second SIM can also be activated if the first one runs out of data packet or when roaming, where some of the operators do not have sufficient coverage in the area.

The router has 4 Ethernet ports 1× WAN port and 3× LAN port. In addition, the Teltonika RUT950 is equipped with Wi-Fi that operates in the 2.4 GHz band. Wi-Fi features 2×2 MIMO technology for a rapid increase in bit rate. The software capabilities of this router are very complex. The main advantages of the RUT950 software include SMS administration, device restart time settings, remote configuration, captive portal usage and much more.

The necessary antennas on both LTE and Wi-Fi are included and are easily removable. They are connected to the device itself using external SMA connectors. If installed in a place where the signal is very poor, more profitable directional antennas can be purchased. A little thing that might please you, is also the SIM card tray ejector tool, known from mobile phone accessories. 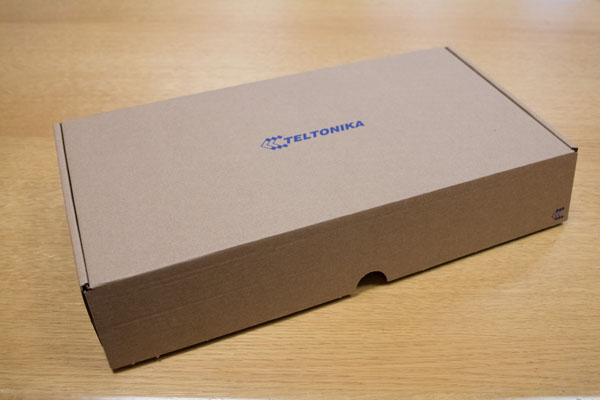 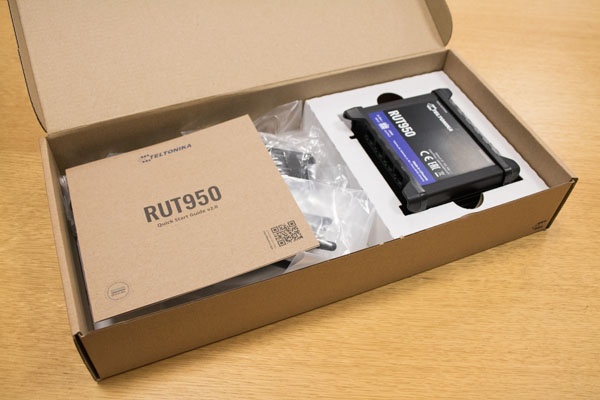 Package contents  after opening the box 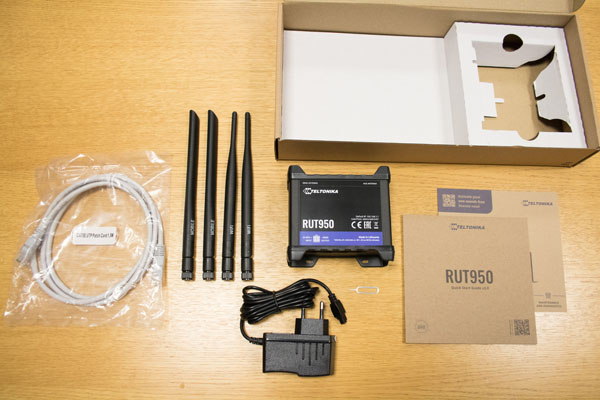 Contents of the box after unpacking 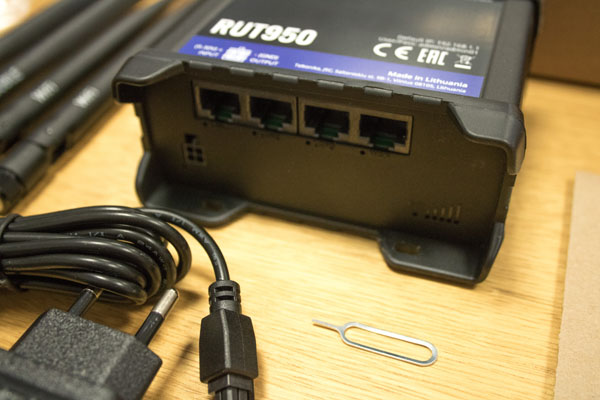 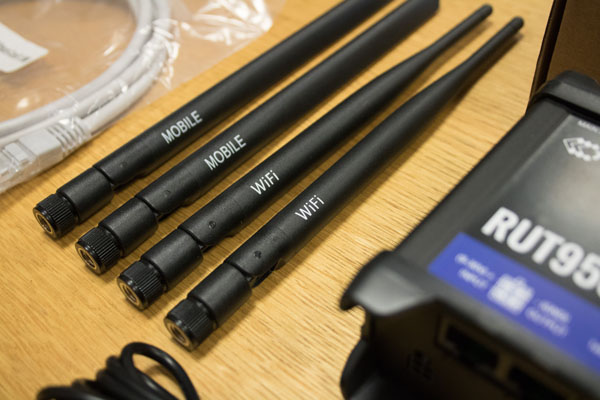 The supplied  antennas have labels. You don't have to where it belongs to. 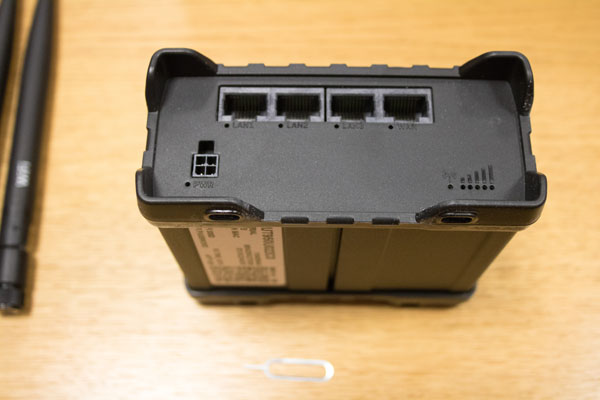 On the front of the RUT950 you will find 4 Ethernet ports, a power adapter connector. Also status LEDs indicating signal strength. 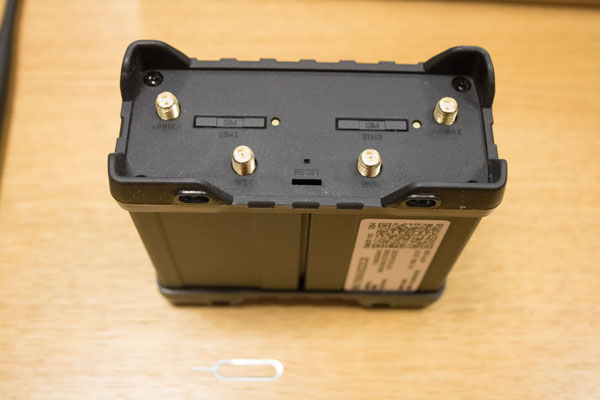 On the back are located 4 connectors for individual antennas, reset button, slot to store a SIM card tray ejector tool to prevent its loss. And of course, two miniSIM card slots. 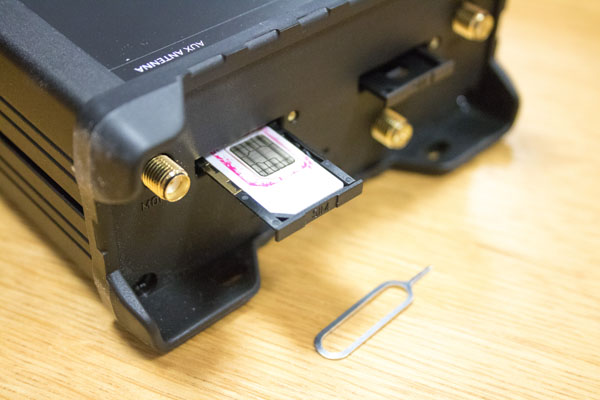 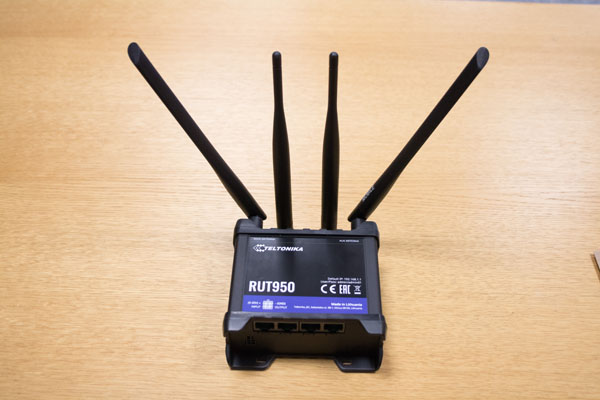 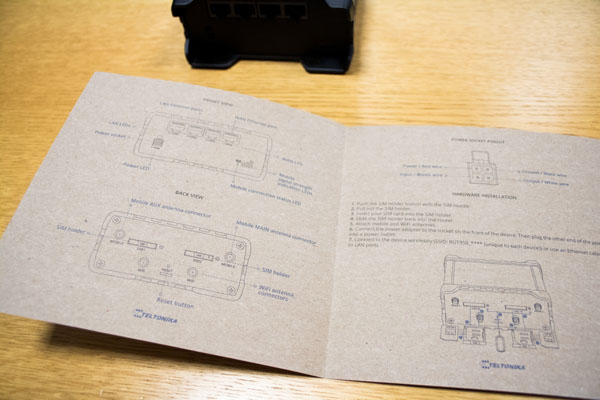 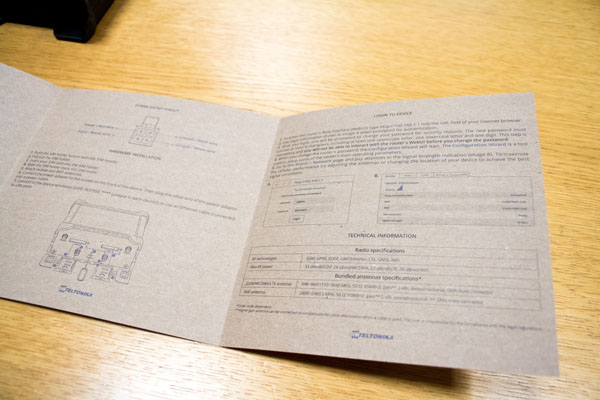 The router also does not lag behind in terms of security. With advanced security support to prevent DDoS attacks, firewall, VPN, openVPN, SSLv3, TLS and many others, high security is guaranteed. Of course there are also routing protocols BGP, OSPF v2, RIP v1/v2 or protocols for remote management via SSH, Telnet.

Another advantage is the ability to power the device through PoE. PoE or Power over Ethernet means that the device can be powered by the same cable that we use to transmit data. Thanks to the customized supply voltage, which can range from 9 to 30 volts, the RUT950 is adapted for use in vehicles.

Like other routers, the Teltonika RUT950 can be configured using a web interface. The router is very user-friendly in this. The user does not need to set up anything, just enter the IP address into any web browser and then it is possible to access all functions of the router. Individual functions are arranged clearly and logically, so orientation in the web environment does not cause problems even for less experienced users. It is possible to configure mobile connection, WiFi AP, Captive portal as well as more complicated scenarios.

The home page of the web interface provides basic information about system utilization, information about mobile connection or WiFi. You can also view data usage statistics. Also, data transmission can be limited to a certain amount for a given period of time. You can monitor the status of the received signal level from the operator's network. It also has the advantage of displaying the latest events that occurred on the router. 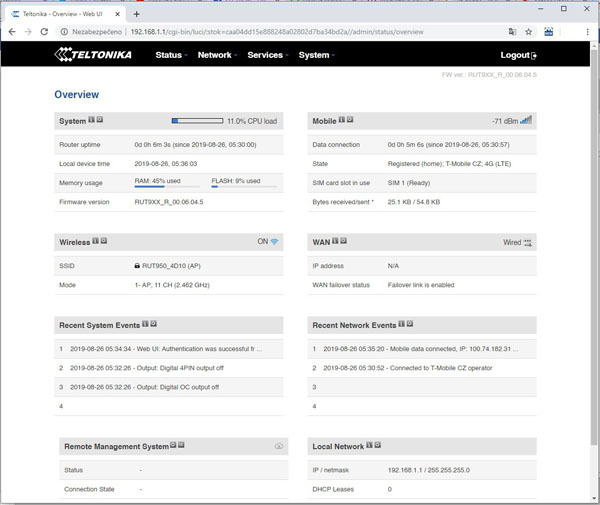 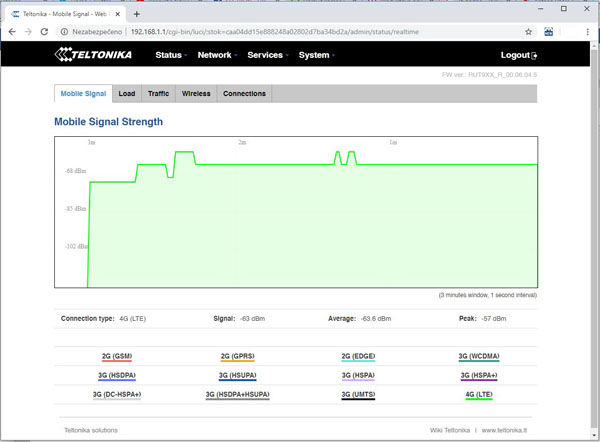 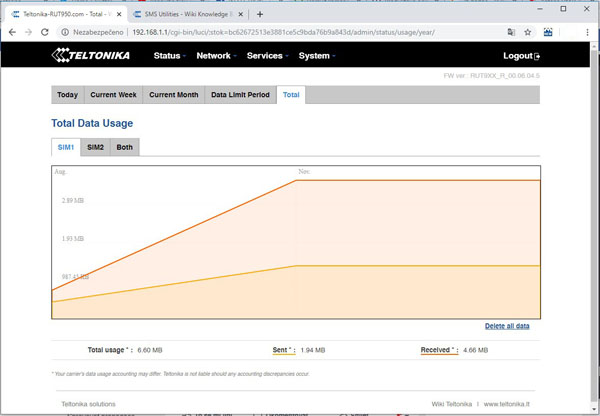 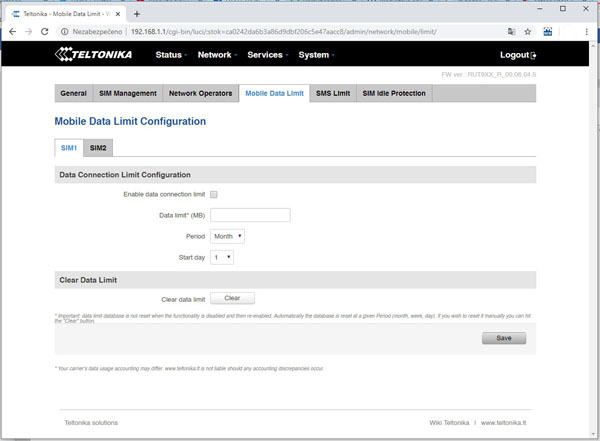 Set the data limit after which the transmission stops. 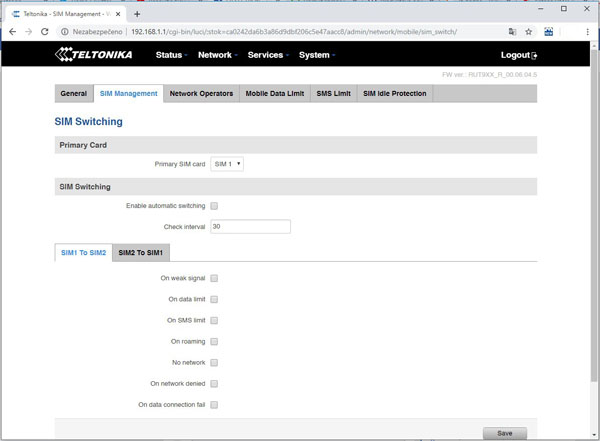 SIM switch  settings. For example, if the operator fails on SIM1, the router automatically  switches to SIM2. This will not interrupt the data transfer via the router. 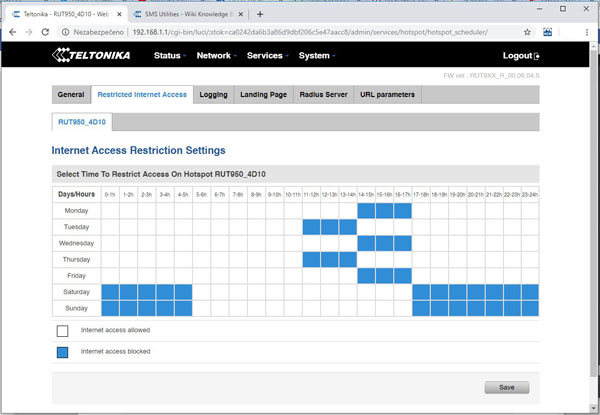 The RUT950 router allows you to set up Internet blocking in hourly blocks. Simply select the times by clicking in the box of the week.

The router offers the possibility to create the aforementioned Captive portal, for example for the purpose of advertising homepage, which is displayed when the device is connected to the router's Wi-Fi network. Access to the network is possible after fulfilling a predefined condition, eg by entering a password, eventually agreeing rules, etc. This feature is often used in public areas such as hotels, restaurants, cafes, pubs and more. Provider can make his network available to visitors in exchange for a "like" to his Facebook page. 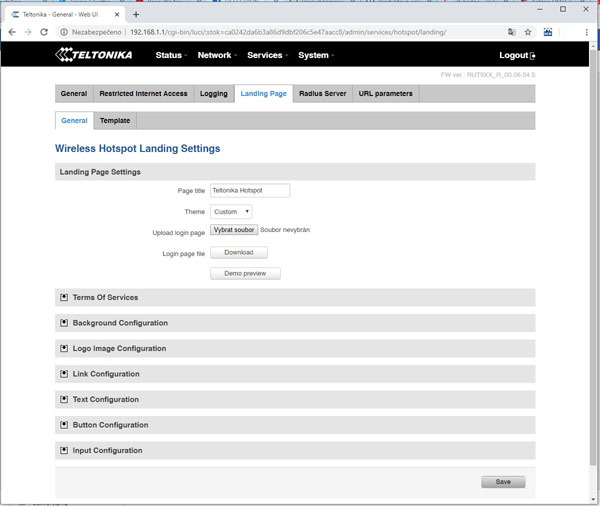 Another interesting feature is the possibility of creating a hotspot, where the sharing of mobile data via WiFi is similar to the creation of a hotspot on a mobile phone. 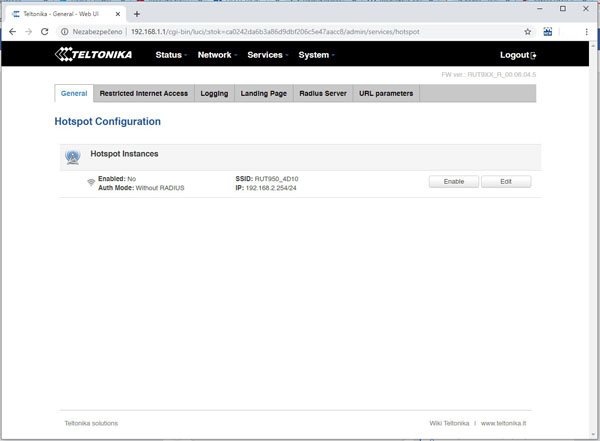 In case of mobile connection, it is possible to choose between GSM, UMTS and LTE technologies. LTE technology can fully replace wired connections for extended periods of time in the event of a power outage. The Teltonika RUT950 features LTE cat 4 technology, which achieves speeds of up to 150 MB / s, as evidenced by the measurement of the transfer rate.

We measured the speeds

The first measurement was carried out using both antennas oriented horizontally. The router was connected to the base station of the Czech operator T-Mobile, which is located approximately 210 meters from the measuring point. There is no direct visibility in place of the base station and there are two high-rise buildings on the straight road, so full speed cannot be expected. The result of the first measurement is the following graph. 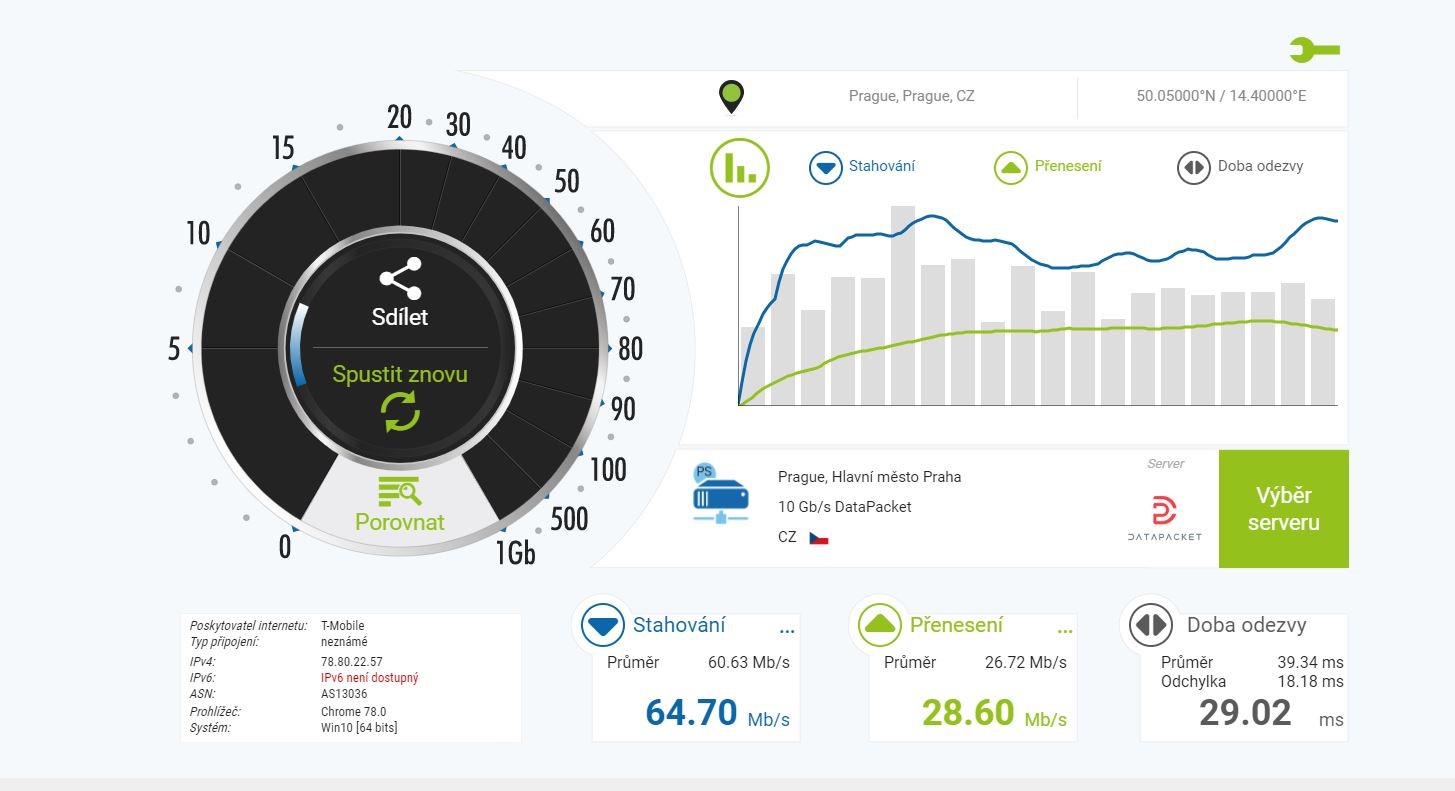 The graph shows that the download speed is 64.7 MB/s, which is a significant difference from the maximum speed, but this is due to the indirect visibility to the operator's base station. The upload speed is similar.

The second measurement was performed with only one antenna under conditions identical to the first measurement. The result of the measurement is the following graph. 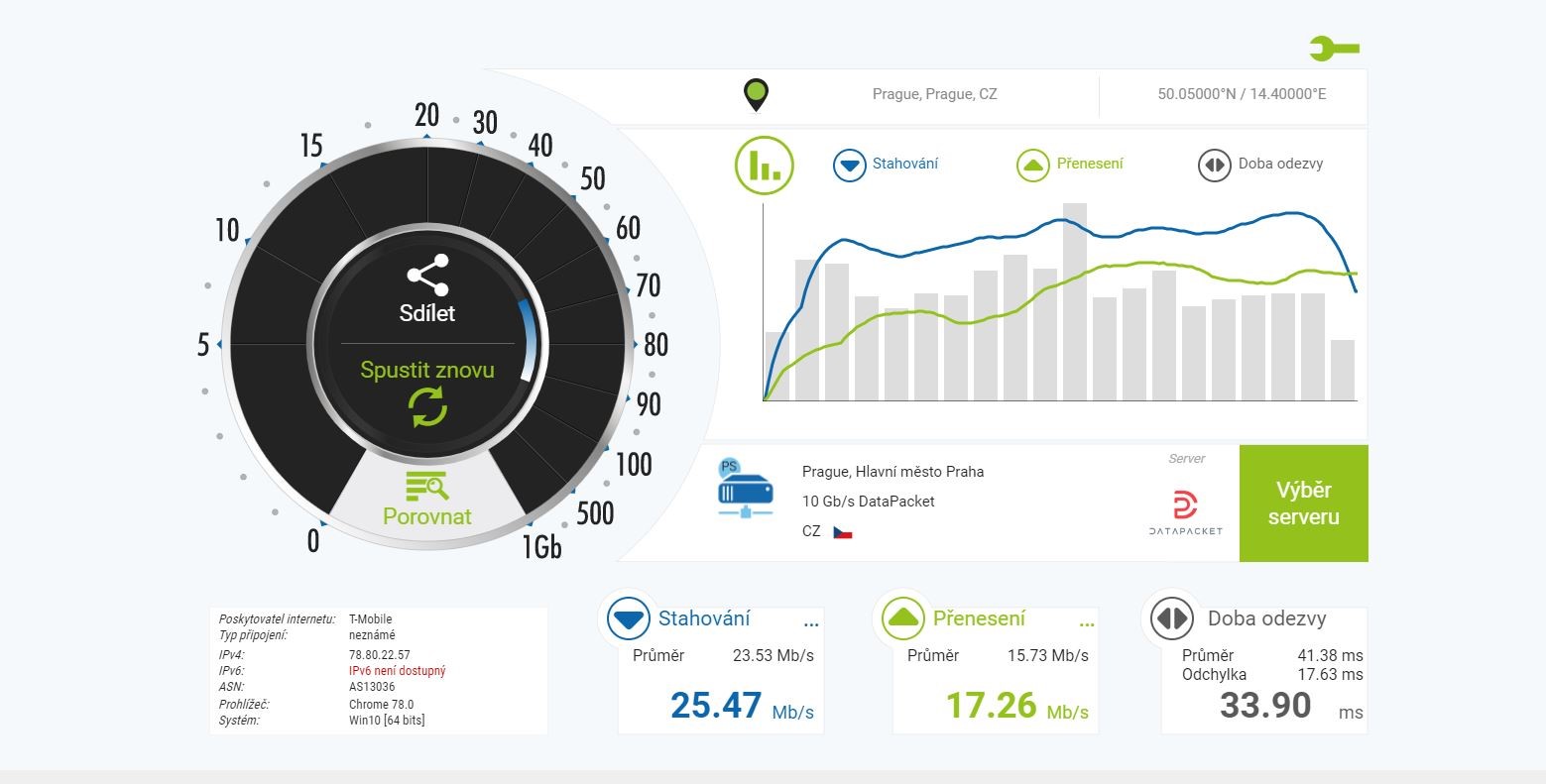 At first glance, it is clear that the graph is significantly different from the first. This is due to the use of only one antenna, in this configuration it is not possible to take advantage of the multipath propagation of MIMO technology that requires at least two antennas. The absence of this technology has resulted in a rapid reduction in the transfer rate towards the router (download) by more than half. Also, the upload speed was almost halved.

The third and last measurement was again with both antennas, this time with horizontal alignment, while the conditions remained the same as in the first or second measurement. The result is again insufficient.

The transfer rate in both directions is the lowest in this case. The download speed is almost three times lower than the first measurement. Also, the upload speed is almost half of its original speed. This sharp difference is due to poor alignment of the antennas on the router, resulting in a large drop in bit rate. It can be seen that the alignment of the antennas has a huge effect on the bit rate and the user should not neglect this step.

There are many uses of the industrial cellular router. We will now avoid engaging in industry where it handles communication, between production machines, meters or sensors, and data transfer to control computers. For example, a typical user would use the router as a source of internet for a mountain cabin, a caravan during a vacation, or a cruise along the coast during a summer vacation. Everywhere there can have quality internet without wired connection. Entrepreneurs will be happy to offer their customers an extra service and provide them with free Wi-Fi in hotels, restaurants, ski resorts or long-distance bus services where passengers can use the Internet connection across the Republic or Europe. You will also think of other places where it would be difficult to bring the Internet by cable.

In addition to the ability to replace a fixed connection with a mobile one, the router also provides many other features. Very useful is function of router configuration by SMS messages. By default, you will find 26 SMS commands prepared in advance.

You can create and configure other commands yourself. 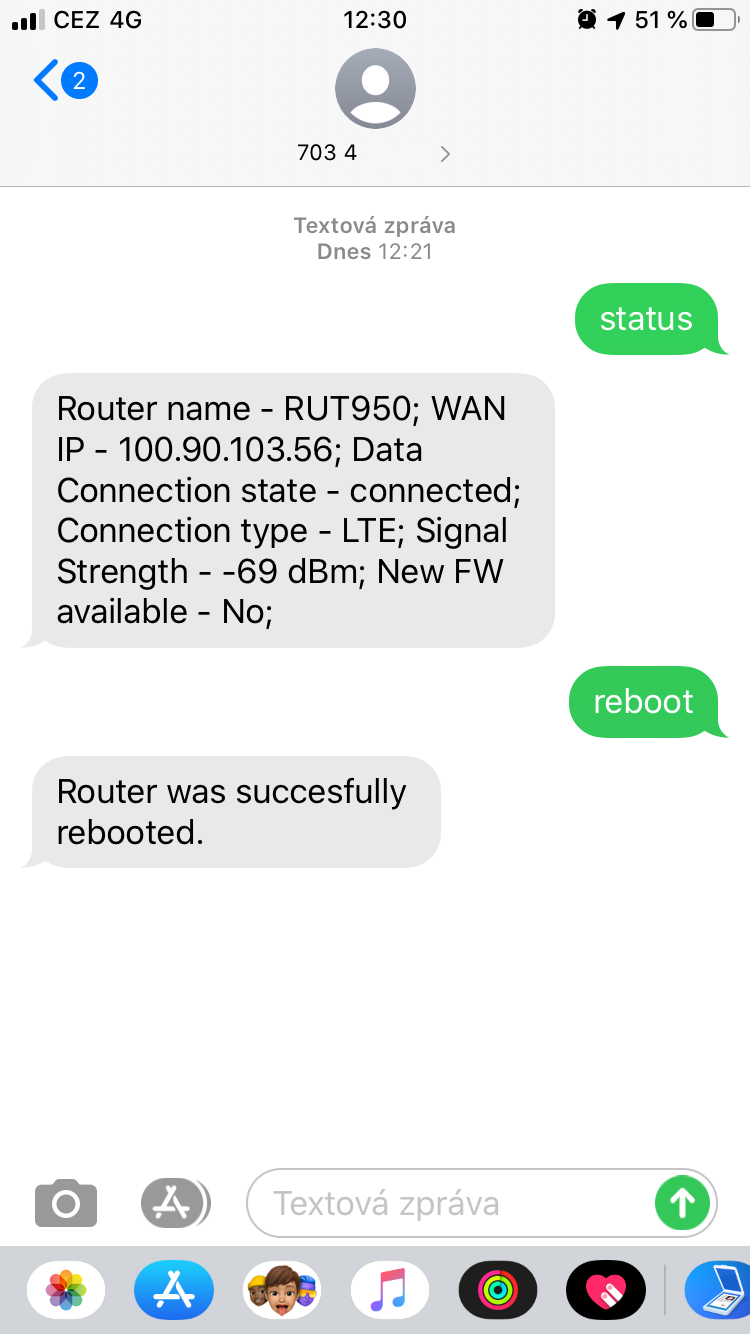 In the router administration you can view the list of logs with the processes that have taken place in the router. The figure shows an example of a remote restart triggered by an SMS command. 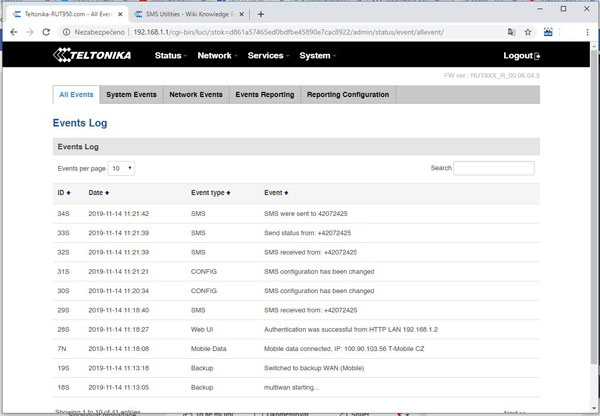 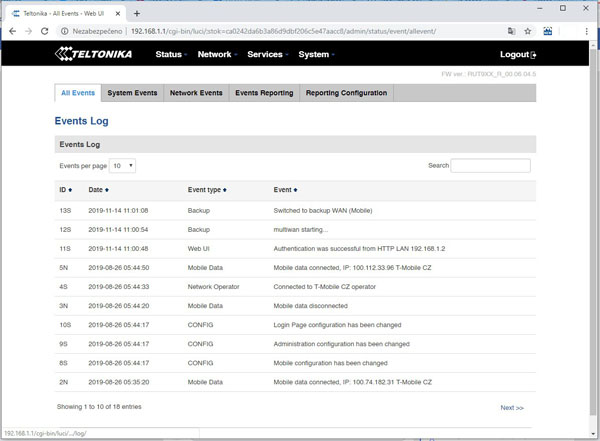 The older version had restricted access to SIM cards. These were placed under the cover of the router. To replace them, it was necessary to remove the front cover of the router. For technicians who were in charge of a larger number of routers in their company, changing SIM cards was a great time. A comparison of the old and the new model of the same router can be seen in the pictures below. 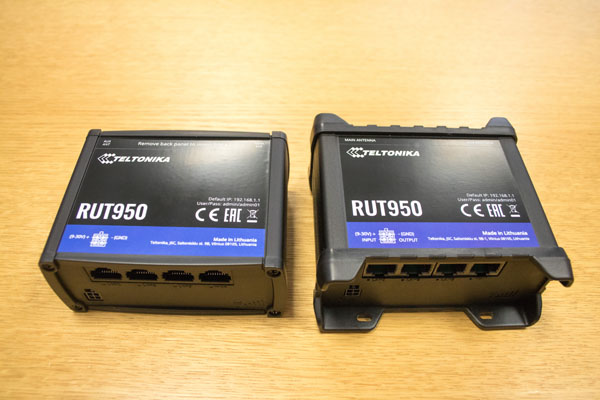 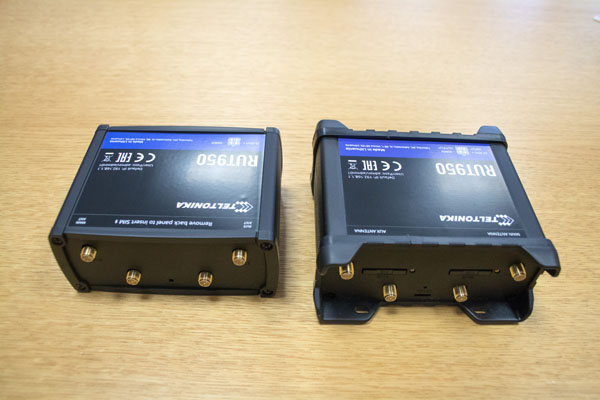 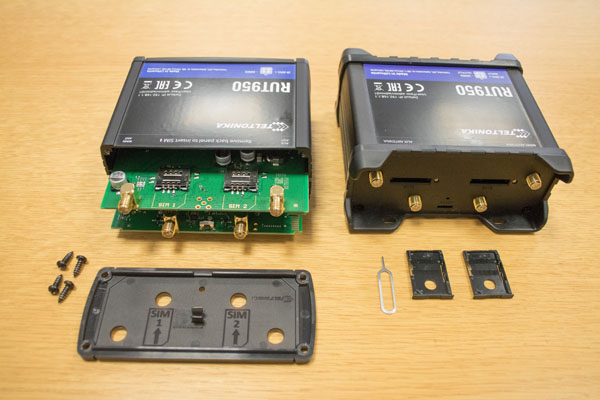 SECTRON is a distributor of TELTONIKA Pro Czech Republic. The offer of routers is varied, which you can see in the attached datasheet or on the product page.

Are you interested in the RUT950 router or another Teltonika product? Do you have a specific requirement and do not know if a particular router meets this? Contact our SECTRON company, we will be happy to help you choose the right product for your solution.

Industry 4G router RUT950 – suitable for LTE CAT4 Wi-Fi. This router is professional, highly affordable CAT4 router equipped with RutOS system, that’s been developed for use in the most demanding industrial applications.